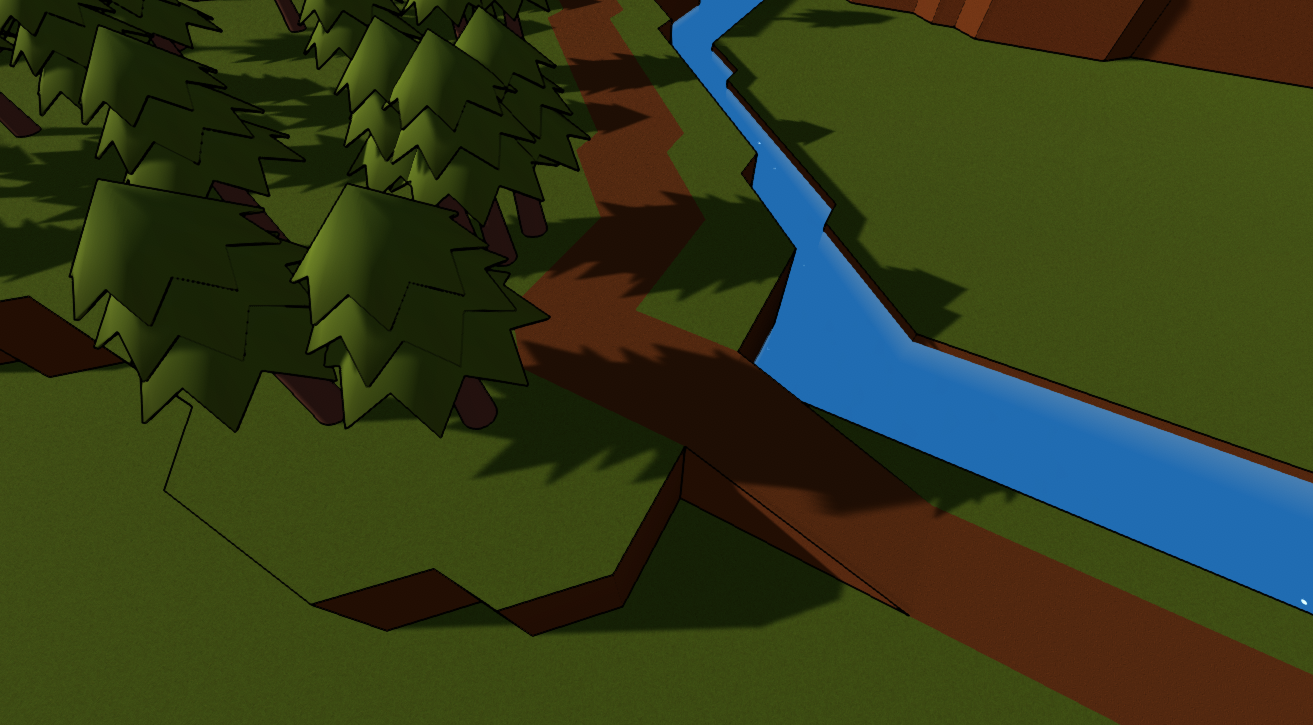 The past month was spent nearly entirely on paths and pathfinding.

While I knew a pathfinding overhaul would be needed, it was hoped that this wouldn’t be for a few months still. However the bulk of the work is now done and Realms has a flexible and fast pathfinding system that should serve it well.

In addition to paths and navigation, some other things that were worked on, but won’t be discussed, include: 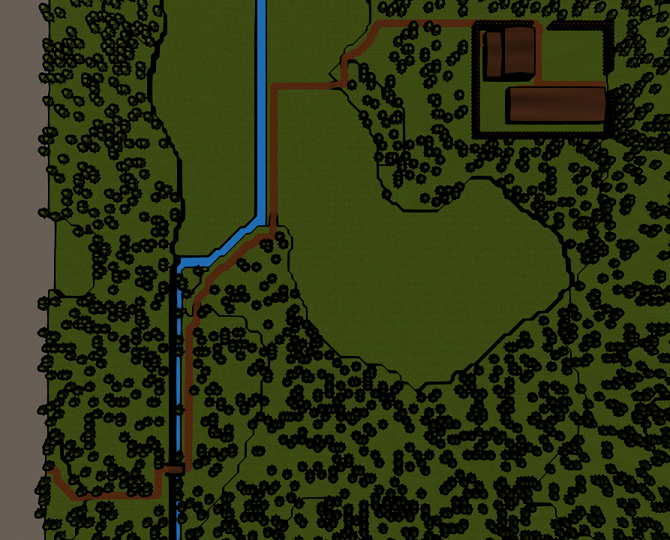 Path through the map, in brown.

A new map generation module was added aptly called PathModule. This is used to generate a physical path through the world, connecting various different points together.

A path can connect locations, such as settlements and bridges, random points in regions, or other even points relative to others. For example,

is used to generate the path flowing through the map as shown above.

Note that the first module specifies a relative point that is actually off of the map. The location is clamped to the edge, but it ensures that the path has the appearance of coming in from further into the world.

The module is used to connect two locations, while the actual generation is (was) performed by a custom A* implementation. This was an implementation that was carried over from the 2D version of _Realms_.

It was a dynamic (for lack of a better name) implementation which crawled the terrain at the time of the request. This was able to generate well formed paths but had some pretty serious drawbacks. Chief among these were:

While the first issue was an obvious drawback, the A* implementation was still useable for the use-case of physical path generation. However the performance prevented it from being a realistic solution.

The main cause of the slowdown was due to the dynamic nature of the implementation. The actual A* implementation, primarily consisting of the frontier structure, was plenty fast, however it had to query the underlying scene and terrain systems at each step. Below is an excerpt from one of the early internal profilings of the A* implementation:

As we can see, the StandardScene.GetNearbyEntities took 27 seconds by itself, nearly a third of a millisecond per query.

This forced me to perform a deep dive on the underlying QuadTree, which is used by the StandardScene, and optimize it. These updates to the scene tree, such as a greater degree of caching and reducing memory allocations, reduced the processing time from 30 seconds to about 900 milliseconds.

While this is a huge improvement it was still far too slow to be used in a real-time scenario. Improvements to the A* implementation, primarily aimed at reducing the number of tiles checked, further reduced the timing to 230 milliseconds.

Much better, but still not good enough. To achieve the performance that was needed, and to allow for arbitrary pathfinding over more than just the terrain, a new solution was needed.

Parallel-Bidirectional A* (PBA*) was the new solution.

What is it? It is exactly what it sounds like: a parallel implementation of A* which search from two directions at the same time. It is a custom implementation that is based roughly on the paper _PNBA*: A Parallel Bidirectional Heuristic Search Algorithm_, though admittedly the algorithm described in the paper didn’t help me much but it did get the idea to start forming in my head.

The current pathfinding is a two-step process:

This first step, generation of the navigation nodes, is key to both speeding up the pathfinding and making it more flexible. Paths are no longer limited to the terrain and can go anywhere there is an underlying NavNode.

There are currently two ways a NavNode may be generated:

Regardless of how a node is created, they all track the following data:

These parameters are then used by the PBA* implementation when performing the pathfinding.

The image comparison below shows a path (in magenta) from a start point (sphere in the courtyard) to an end point (player pawn) which navigates through the barracks building. The slider reveals the underlying navigation nodes, which are colored based on their clearance value. Nodes with a higher clearance are green, and those with lower are red. Nodes which do not have sufficient clearance for the requested path (minimum clearance of 0.5) are hidden. 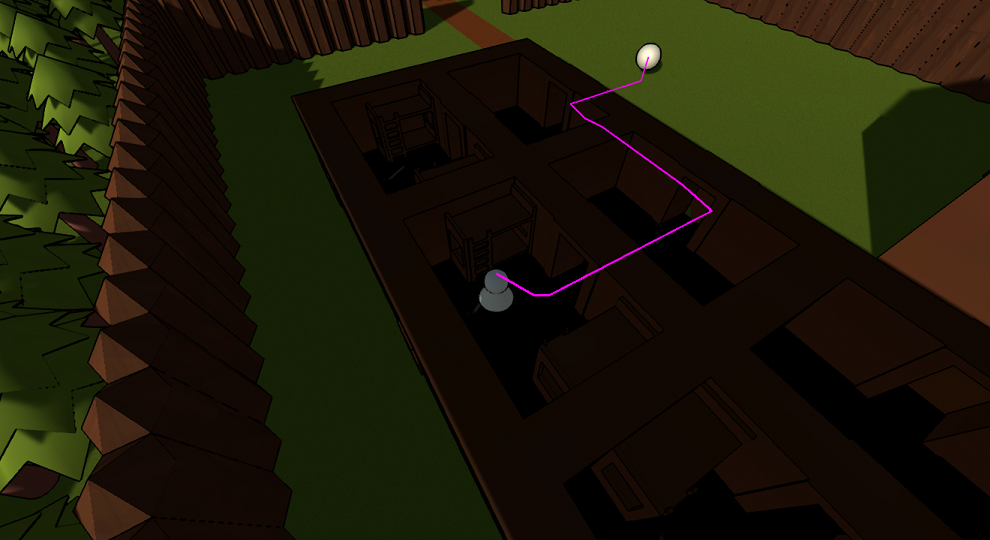 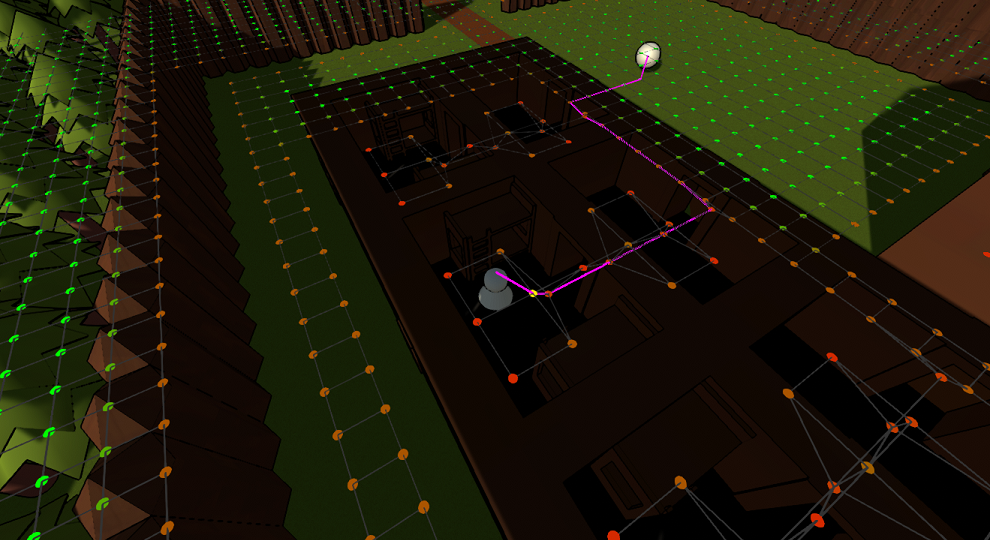 Path generated into the barracks. 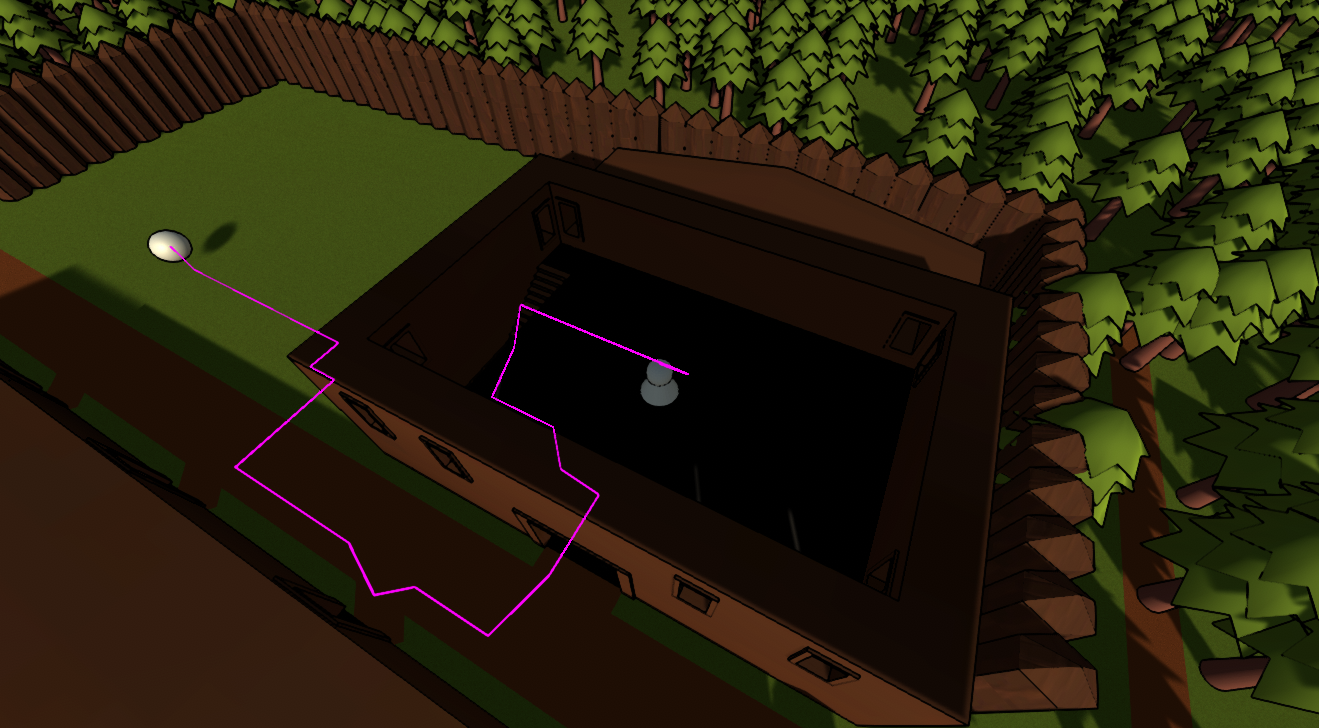 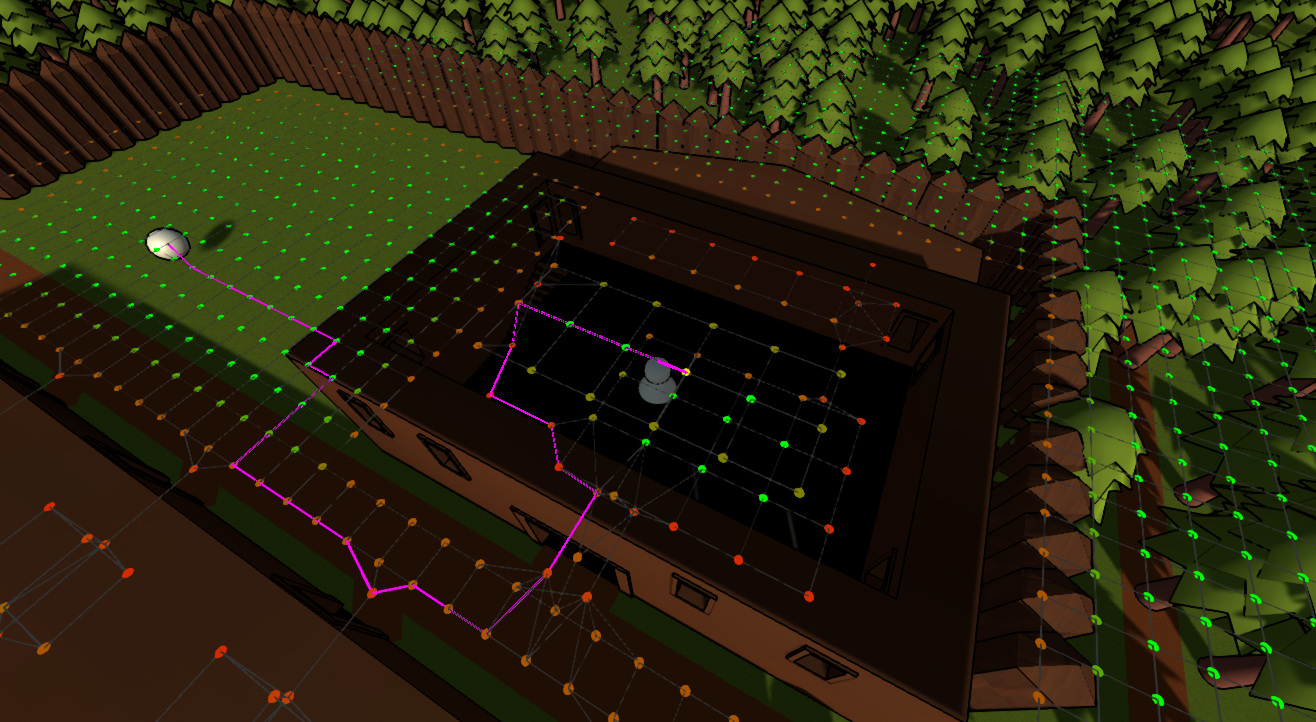 Path generated to the top floor of the hall.

Not only does the usage of navigation nodes allow for arbitrary paths (not limited to the terrain), but they also allow for creatings paths of differing sizes. The same graph is used for paths 1 unit wide (player), 2 units (path through the terrain), and up to 6 units which could be used for larger entities.

There are two key differences between A* and PBA*, hence the extra two letters in the acronoym.

So starting at both ends, the search looks for the opposite end at the same time. Each of these searches are distinct, owning their own frontier of nodes. However, before exploring a node, they check if the opposing frontier has also visited the node. If so, the searches are considered to have converged and a path was found.

This means that each search only has to explore half of the number of nodes (as they will nearly always meet in the middle), and they are happening at the same time. Together, these characterstics mean that PBA* should only take approximately 25% of the time of traditional A*.

It can be even better than that in certain cases, especially for situations in which the end node is unavailable. In A* the entire graph has to be searched to determine that the end node can not be reached, however with a bidirectional search it can be determined almost instantly that the two points can not meet as the alternate search (starting from the end) will quickly run out of nodes in its frontier.

However, there is a downside to performing a bidrectional search which is related to the fact that the resulting path is typically a combination of two separate searches meeting in the middle. This can result in a less-than-ideal path which a traditional A* would have done a better job at. However, this problem really only presents itself in longer paths. For AI, the entity will be periodically refreshing its path which will result in the excess being removed and a more efficient path being formed.

After switching to PBA*, and the navigation nodes, the same path that previously took 230 milliseconds now only takes 5 milliseconds!

This is still relatively expensive, considering we only have 16 milliseconds per frame, but it is acceptable when considering:

At this point the best way to improve the pathfinding performance is to simply reduce the number of nodes that must be visited. This can be done by generating a sparser terrain navigation node graph, but it is not a priority going forward. 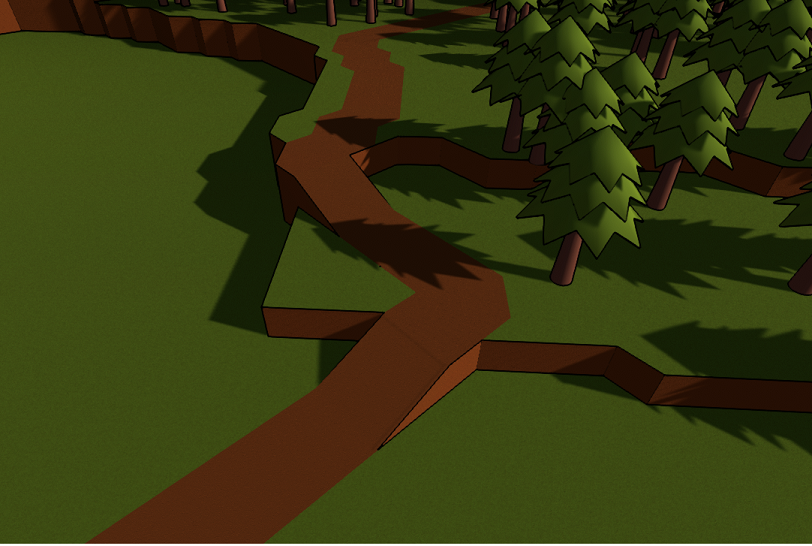 A double ramp, what does it mean?

While the path mesh existed and was used by settlements last update, it underwent a few big changes in June. Key among these were colliders, diagonal corners (to match the diagonal terrain), and ramps.

Internally all terrain paths are stored as simple 3D line segments with the PathSegment class. This is just a pair of 3D points as well as a directional vector. When generating ramps these segments are checked to see if their start and end points are at different elevations.

If so, then the segment is considered a ramp candidate. Neighboring segments are checked to see if any of their path could be “borrowed” for the formation of the ramp with an ideal slope of 1/2. If sections of neighboring paths can be used, then they are allocated to the ramping segment, otherwise the ramp has a higher slope. The restrictions to the slope are determined by settings in the PathModule, but typically the maximum slope is either 2 or 3.

This can lead to cases of some pretty extreme ramp slopes, but generally they are able to achieve the desired 1/2 slope. Currently the ramping segment may only borrow from other segments going in the same direction, but future updates may allow it to take from as many segments as needed to create the slope, resulting in ramp switchbacks or similar. 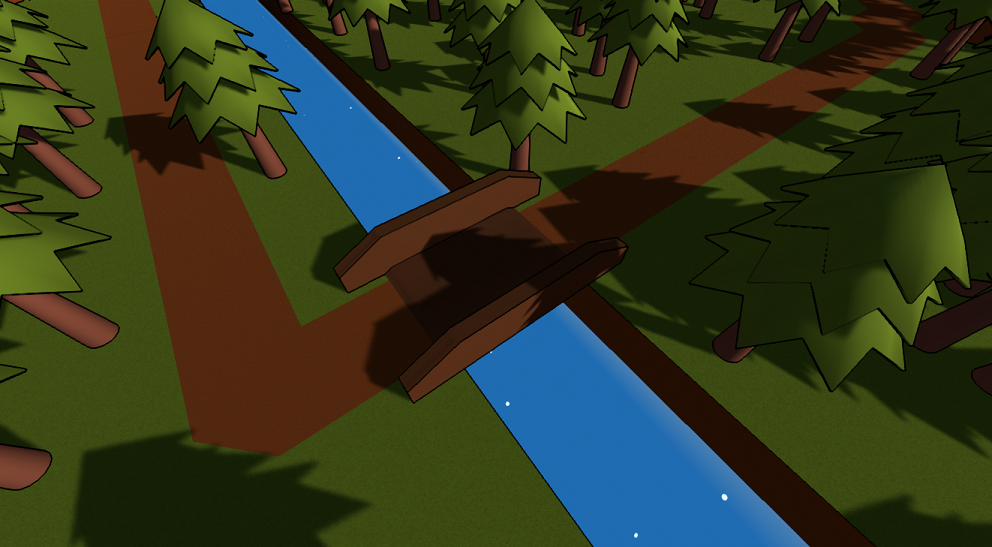 Bridge over the smaller river.

The previous update briefly explained the work done on Settlements which were the first kind of Location added.

At the start of June a second kind of location was added - Bridges. Like settlements they are defined via a JSON file which specifies the following control parameters:

The named region is searched for a valid location to place the bridge. If one is found the specified entities are spawned to span the gap with the other entities placed on each end.

These connection points are then used to generate paths through the terrain to connect different locations to each other.

World generation for Realms is nearing an alpha stage where a majority of the base systems are in place. This leaves the following candidates for what should/will be worked next:

The first two are directly connected, and the underground will require handling of multiple terrain/z layers.

The fourth will be the first step into adding in the actual game systems, as Realms is more-or-less a map generator at this point. This will also add functionality for scene transitions and saving/loading which will be significant additions.