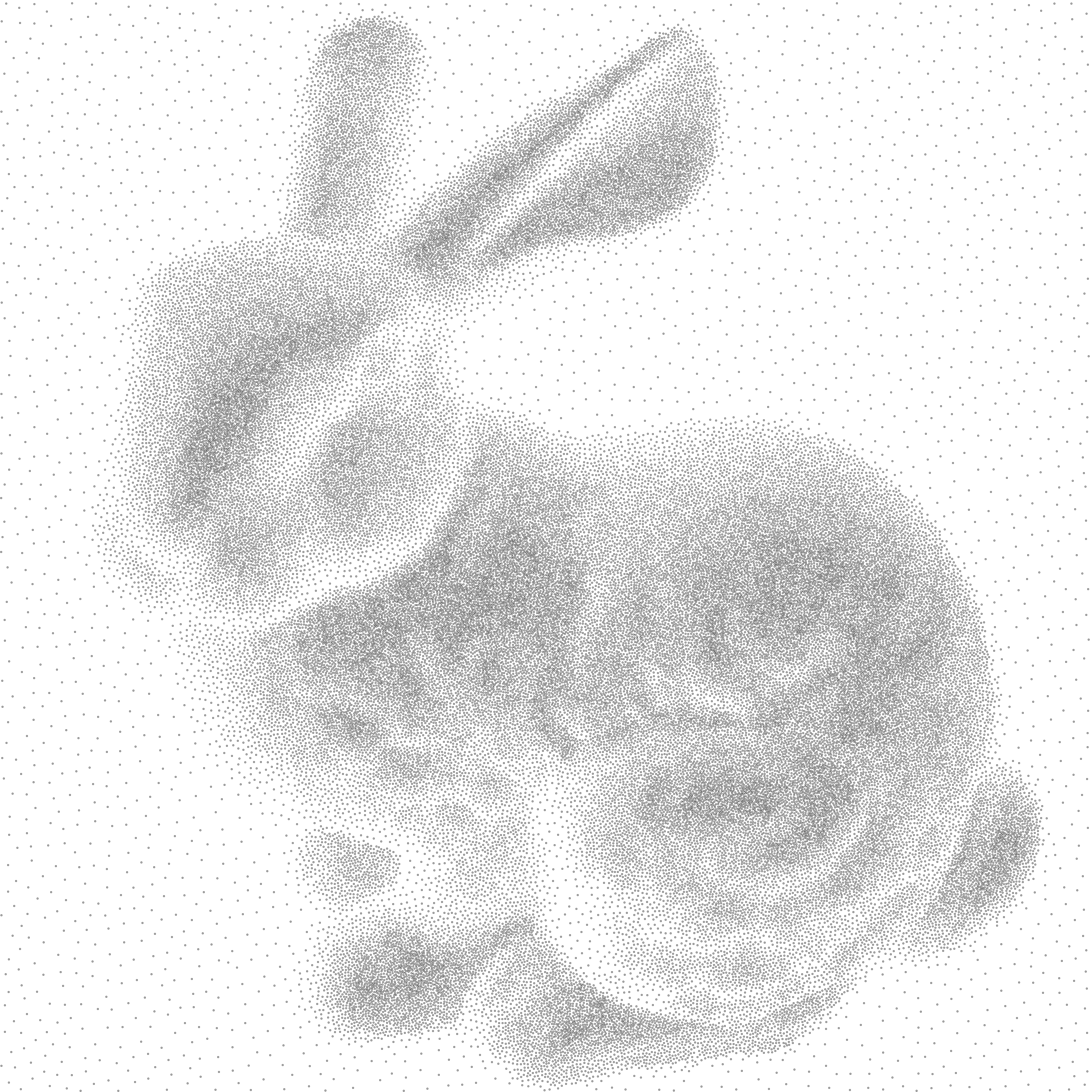 A 4096x4096 rendering of the Stanford Bunny using the Variable Density Sampler. Zooming shows no overlap between points.

Poisson Disk Samplers are an approach to generating blue noise which have some very useful properties in graphics and game programming. Perhaps chief among these is the ability to have random point generation while maintaining a minimum distance between points.

In this ramble I will be presenting two C# Poisson Disk Samplers - one with an uniform minimum distance (radius) across its domain, and the other with a variable radius that can be controlled by any sort of input. Naturally the uniform sampler provides better performance but at the cost of control. Both samplers are two-dimensional, but are easily modified to handle any higher dimensions as needed.

The focus will be on the implementation of the samplers, with details about the underlying maths left to other source.

We will begin with the uniform sampler which uses a single minimum distance between points (sample radius) across the entire domain. This implementation is based on the paper Fast Poisson Disk Sampling in Arbitrary Dimensions, and such it can be easily extended to higher dimensions if your use case demands it.

At the risk of parroting the source material, a quick explanation of the algorithm we will use.

Once initialization is complete, the following steps are repeated until the ActiveList is empty.

Lets cover these steps in more detail with code samples.

For some context, our complete class will implement the following methods:

Our sampler will be using a spatial partitioning grid in the background in order to facilitate spatial queries. Each cell of the grid will be sized so that at most only one sample can inhabit it at a time. This helps reduce the number of intersection queries we have to perform during searches. Plus since we know the grid will be uniformly filled with potentially every cell having a sample within it, then there is no real waste that would normally be solved by a different spatial structure (such as a quadtree).

For our grid we will have the following properties:

These will be initialized, along with our ActiveList and SamplesList, in an aptly named Initialize method:

The list representing the spatial grid, SpatialLookUp, stores integers which are indices into the SamplesList. All elements (grid cells) are initialized to -1 to indicate that the cell is empty.

How is Cell Length defined?
The CellLength is defined as \(l = {r \over \sqrt{d}}\), where \(d\) is the dimension. This ensures that there will only ever be enough room for a single sample in each grid cell. This formula of course scales to higher dimensions if the sampler needs to be adapted to such purposes.

With the grid initialized we need a way to access the cells within it. This is done in the GetSpatialIndex method where we simply return the cell that contains the requested (x, y) position.

Next, we need to be able to add a new point to the grid. Adding to the grid indicates that the sample is valid, and as such also needs to be added to our SamplesList. Additionally all new points are added to the ActiveList so that we can attempt to generate more points around them, which is how our points spread across the domain.

The last step before our setup is complete is to be able to provide some basic spatial queries for our grid. This will let us check if a new point is valid - that there are no other points within the minimum distance. This is implemented in two functions: IsSampleNearOthers and IsSampleNearSampleInCell.

So we get the cell that our sample will inhabit via our GetSpatialGridIndex. We first check to make sure that that cell is empty and then we check the immediate neighbor cells. As we sized our grid cells such that only one sample could be in each cell it also holds that each sample can only potentially overlap the immediate neighboring cells. If any of the neighbor cells contains a sample which overlaps our prospective one, then that the new sample is rejected.

Here we simply validate the neighbor cell (as we could be looking out-of-bounds) and if it contains a point, checking the distance between that point and the prospective point. Now the spatial grid is fully set up with all needed accessors and spatial queries. 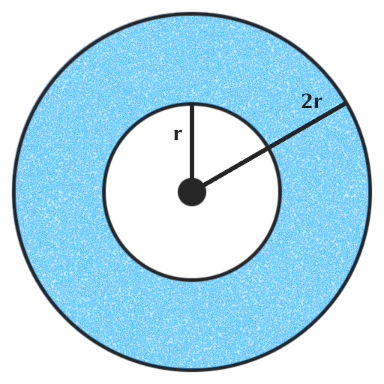 Our sampling annulus. Random sample points are generated within the blue bounded area.

Before we can implement our generation loop, we need one more method implemented: GenerateRandomPointInAnnulus.

For sampling we use two random values:

With these we have a random point within the annulus.

We can now move on to the actual noise generation now that all initialization is complete and utilities are ready.

As stated earlier, we begin by generating a random point within our domain. This will be the first entry into both our SamplesList and ActiveList, and the algorithm will build off of this point and spread across the entire domain.

We call this within our Generate method, immediately following initialization.

With one point in our ActiveList we can begin our main loop.

What is List.RemoveUnorderedAt?
This extension method is explained in the C# List Removal Performance ramble, and it can be easily adapted to any other language.

Breaking the above down, we loop through our ActiveList until it is empty. On each iteration we choose a random sample point and attempt to generate a new valid point around it. If we can successfully generate a new point then that point is added to both the ActiveList and SamplesList and we continue to the next random point. However, if no point was generated within our allowed number of tries then we consider the space around the point to be filled and we remove it from the ActiveList.

And with that, our uniform sampler is complete. Given a domain and sample radius we can fill it with random points that are guaranteed to be a minimum distance from any other point. This can be used in a whole host of applications and can be easily extended to toher domains or adapated to other languages.

For the final complete implementation, see the source code. 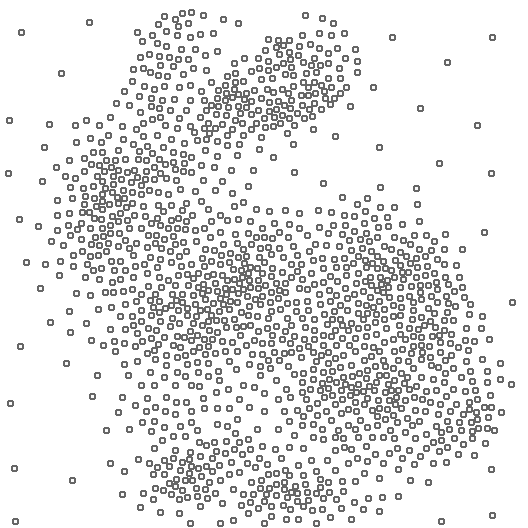 The same Standford Bunny, but this time rendered at 512x512.

While the uniform sampler is fast, it has a distinct lack of control which may hinder it certain applications. This is where the variable sampler comes in, which trades in some performance with a much greater degree of control of the final output by allowing for variable sized sampling radii.

This particular implementation allows for complete control over the radius which can be driven off of a sampled texture, noise generator, or any other control. It is built off of the uniform sampler and uses the same core generation loop, and has the following distinctions:

The first step could also consist of replacing the grid entirely with another spatial structure, one that you may already have on hand. However it is imperative that the radius of each individual point is tracked and respected.

In order to accomodate variable radii we need a more flexible spatial grid (or other structure).

For this purpose a new class is added, SpatialGrid2D<T>, which is used by our new VariablePoissonSampler2D. However the implementation of this grid is nearly twice the length of our uniform sampler. As such, we will only discuss at a high level the changes made to the grid. The implementation can be seen (or copy+pasted) from the source code.

The key changes being:

This particular grid was also updated to allow a generic object (T) to be stored within the grid alongside each point. While not necessary for our poisson samplers, it does allow the grid to be used for other purposes.

With the SpatialGrid2D, the variable poisson sampler is approximately ~30% less code than the uniform sampler and the majority of the remaining code is nearly identical to the uniform implementation.

Can Another Spatial Structure Be Used?
Absolutely!

If your library already has a QuadTree, BVH Tree (sphere bounds), etc. then go ahead and use it. This spatial grid was whipped up very quickly, and while it works for these samplers there has been no real tests or performance optimizations made to it.

With our new grid in place we can now implement our variable sampling radius.

Within our VariablePoissonSampler2D we want to add a new delegate:

This defines the function signature used to provide our radius value. Next we modify our Generate and Initialize methods to take in the delegate and a min/max sample radius.

As discussed in the previous section, the minRadius and maxRadius are only used to optimize the cell sizes of our new spatial grid. There is no enforcement on these limits. A couple of modifications to the main generation loop and we will be done with our upgrade to a variable sampler:

Much of this is the exact same as the uniform sampler except for two sections:

Here we call into our delegate to retrieve the sampling radius for the current position. And then,

We use our new spatial grid to check if a potential spot is open, and if so to add the point to the grid.

And that is it!

Our uniform sampler has been upgraded to a variable sampler and is ready to be used. As is evident by now, one way to drive the sample radius is by using an input texture and calculating a radius based on the pixel value. This is how the Stanford Bunny images were produced and an example of such code in Unity is shown below.

Of course textures aren’t the only way to control density. I suggest to play around with other schemes, and even try modifying the sampler to allow for multiple passes and see what sorts of patterns can be generated from that. 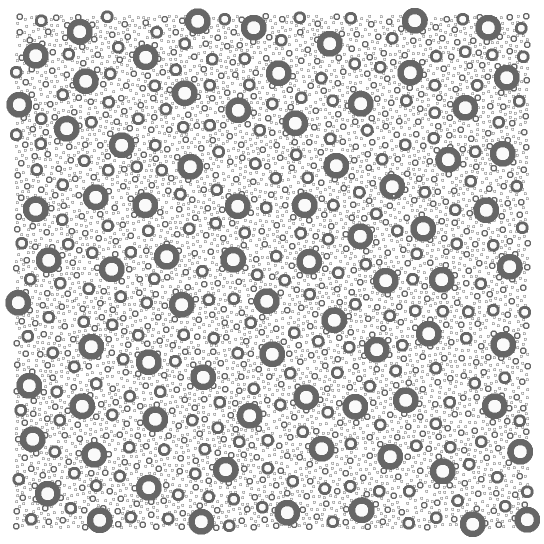 Four sample passes, each pass reducing the radius by half. To achieve this the sampler was modified to output (x, y, radius) sample values.

See the code on GitHub: https://github.com/ssell/VariablePoissonSampler

Above is an Unity sample project with the following:

The 2D samplers only use Unity for the Vector2 which can be easily swapped out if you are using a different framework.

The code is for reference and educational purposes only. No guarantee is given towards the stability, correctness, or well any other characteristic by which it could be measured.